Sorry it has taken so long to get our second review up. We were originally going to review Epic Mickey, but we realized that we needed to finish the entire game before trying to review it. The game was real slow to start, but it's picking up and getting better and better the further we get. I just don't think an early review would have done it any justice. So we went ahead and started our review on Super Smash Bros 64. because it was in the lead on the poll by quite a few votes.

Now, on to the review. Smash Bros. is one of those games that you could just play forever, given that you like fighter games and Nintendo characters. It has simple controls, great multi-player, and it's just plain fun. Anyone can pick it up and in no time and have a total blast with their friends. I'm a veteran at the game, and sometimes Daemion can be a challenge to beat. I only had to teach him a few things about the controls before he was smashing his way to victory. He even beat the game in his first hour playing it(on easy, but still). But that's not to say there isn't any complexity to the game. Some pros out there could obliterate the average player in no time. There is so many possible combinations and techniques for each individual character that you could never learn them all. All the characters have their own individual movesets. Some are harder to master than the other, but this really helps the newer player to find that easier to use character that fits their playing skills. Most of the easier to use characters are not as powerful, but where they lack in power, they either make up in speed, simplicity or range. The more difficult characters are more powerful, but slower and need better timing to land the blows. This really makes for a great multi-player experience.
Nintendo really hit the nail on the head with this one. I played this the first week it came out when I was in my teens. I loved it back then, and it's still just as good now. There has been two more sequels to this game that have tons more content, better graphics, and the newest has online play. But Super Smash Bros., even after all these years, is still one best playing fighters period. It has it's own core elements to it that makes it different than than the sequels that followed. After all, Smash 64 started it all. It will always have a special place in my heart.
Daemion and I have had this game since it was first added to the WiiShop Virtual Console Service back on December 21st 2009. I tried to get him to play it with me, but I just couldn't pull him away from games like Mario Galaxy and Wii Sports Resort that he had got for Christmas. A few months later, after I had got all the secret characters, I finally got Daemion into playing the game. One of the first characters he picked was Captain Falcon. Once I showed him how to do the Falcon Punch, it was on. But not long after finally getting him to play, our Wii bit the dust and we had to send it in for repairs. When we finally got it back, the save files were gone(Back them up!). This was devastating to all of us, especially Daemion. He just couldn't understand why they were gone. There wasn't many games that we wanted to play because of all the stuff that we had to do in order to have all the extras, or save points etc.. It was quite some time before we ever went back to play Smash Bros., but when we did, the realization that there was no Captain Falcon was enough to make Daemion change it to another game. He just wasn't having it, and I don't really blame him. I know it only takes beating the game on any setting in under 20 minutes to get Falcon, but we were just bummed out about it, so it wasn't touched for a long time.
Though, not long back when we were looking through our downloaded games collection, I asked Daemion what old school game he might want to review. To my surprise, he said Smash Bros.64! Finally, a reason to get back and play this great game! I had my fingers crossed hoping it would win while I was adding it to the poll on the blog. Thanks to everyone who voted for it! Mario Kart would have been great and all, but Smash Bros. is another one of my all time favorite games, and I had so much fun playing it with Daemion in the past. His gaming skills has gotten remarkably better over the last year, so he was having an easier time with advancing and taking advice on what he could do in the game. This just made his experience that much better and more rewarding.

[Parental Guidance]
Overall the game is easy to navigate. When playing 1 player, the difficulty level can be changed for the less experienced players. When playing muliplayer, you can adjust the how good the computer can be in the player select menu. You can also change it to teams so you can try and help someone or newcomer too.
The only thing you really need to worry about is how easy it is to Delete all of your game data. It's just a few clicks away on the main menu. If you have a little one who isn't very good at reading, make sure you let them know about this. Loosing all your data on this game isn't something you want to do by accident. Some of the secret characters can be very difficult to get. If your one of those parents who has to play Mario Kart for hours on end to get all the secret characters for your child just to have it deleted by them because they didn't know what they were actually doing, listen to this warning! I've been there and it's not fun!
This game was Rated E (Cartoon Violence) by the ESRB.
[Total Playtime]
18 to 20 hours in around 1 year
(10 in the last week)
He beat the game on EASY with every character except Ness. Has also beat the game on normal with 5 lives. He is currenly trying to beat it with 3 lives to unlock Ness.
[Wow Factor]
How cool is this game?
Daemion: This game is awesome. It has Mario, Luigi, Donkey Kong, Link!, uh, Pikachu and Captain Falcon from that F-Zero game. Oh, and Kirby! I love Kirby.
What would you rate this?
Oh it's a ten.. easy.
[Gameplay]
What's the scoop Daemion? Is there anything that you would change about this game?
Nope. It's so easy to control. I love four player battle. The secret characters are kinda hard to get, but I like it. I get better every time I play. It's a 10.
Daemion, your not gonna start handing out 10's again are you?
No. (laughs) Ask me another.
[Replay]
Ok.. What's the Replay on this? Do you see yourself coming back to play this anymore now that the review is over?
Yeah, I still have to get Ness, but after that not so much. It doesn't have online. So I'll only play if you want to.
(Yes! This means we'll keep playing this one!)
So what's the score?
I give a good 8. If it had online it would be more.
[Graphics]
Compared to other N64 games you've played, how good does this look?
Well, it looks good. But I think it could look a little better. It's an 8.
[Sound]
What do you think about the music and sound effects? Any of it stuck in your head?
Yes! I love the music. It's my favorite kind, but not the best I have heard. 9. 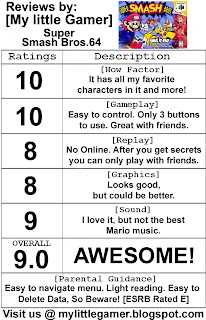 (Click image for larger view)
Thanks for stopping by and reading my sons review of Super Smash Bros. 64.
This game was downloaded from the WiiShop Channel for 1000 points.
If your looking for something to play with the kids, or to just revive the old school gamer in you, get this. It's worth every penny.
Up Next: Epic Mickey and ???

-Dustin, Holly and Daemion
Posted by My Little Gamer at 8:54 PM