Look at what we did to our Wii 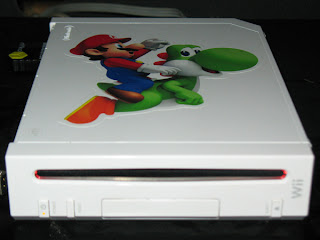 What do you guys think? Got the Sticker and the Wii Light Kit off Ebay. The sticker was $6.00 and the Kit was $5.50. It wasn't that hard to install either. It's called a DVD Gate and it's made by Talismoon. The kit comes in Red or Green. It was pretty easy to install, but the little standard phillips screwdriver that came with it was barely too big. So if you plan on ordering one to install on your wii, keep in mind that you will need to get a very small phillips screwdriver if you don't have one already. Plus, the black soft material(Disk Protector) in the kit is a little rough, so use the original one that came with your system.. You wouldn't want to possibly scratch your disk because the material is too rough. I found this out the hard way and had to redo everything.. Its real easy to take off the new one and put the old one on. Other than that, its a nice and easy way to customize your wii... and best of all, it doesn't void your warranty. You never have to open up the inside of the console, just the front.

This will be the last post for the night.. So, Goodnight everyone!
-Dustin
Posted by My Little Gamer at 10:36 PM No comments:

Email ThisBlogThis!Share to TwitterShare to FacebookShare to Pinterest
Labels: Our Creations, Wii 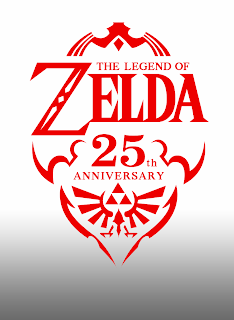 (Click for larger image)
link
-Dustin
Posted by My Little Gamer at 8:51 PM No comments:

3DS NEWS and Screens - The Legend of Zelda: Ocarina of Time 3D 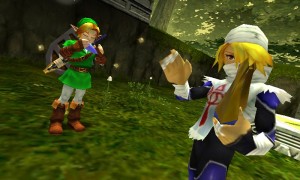 More here
At Iwata's keynote at GDC, he stated that Zelda: OOT3D would be out sometime in June.
Thanks to 3DSFocus and GoNintendo
-Dustin
Posted by My Little Gamer at 8:42 PM No comments:

SAN FRANCISCO, March 2, 2011 – A new 3D game from Nintendo's iconic Super Mario series is in the works for the Nintendo 3DS™ portable system. Nintendo also announced two upcoming collaborations: Nintendo 3DS owners will be able to connect automatically to the Internet at more than 10,000 AT&T Wi-Fi Hot Spots, while Netflix members will instantly stream movies and other content on their Nintendo 3DS systems. These features were announced today at the Game Developers Conference during Nintendo President Satoru Iwata's keynote address, titled "Video Games Turn 25: A Historical Perspective and Vision for the Future."

Read more »
Posted by My Little Gamer at 8:31 PM No comments:

-Dustin
Posted by My Little Gamer at 4:56 PM No comments:

Wii Trailer - The Legend of Zelda: Skyward Sword at GDC 2011

This looks amazing.
I can't wait for this to come out!


-Dustin
Posted by My Little Gamer at 4:45 PM No comments:

Wanna add us as a friend on your Wii? Every time we get a new(or older) game with WiFi we will message all our friends to see if they have that game and want to exchange game codes. That way you could end up playing against Daemion in an online match, and it might be recorded and posted on the blog! All you have to do is add our Wii code to your system, then leave a comment here with your name and code, or you can just email the code to:


I'm sure some of you may have noticed that there is a couple E 10+ games here in the list. We actually do let Daemion play them from time to time. I checked the games before buying them, and there isn't anything in them that he hasn't seen on Daytime TV or talked about with his friends. So please don't think that we'll let him play just any game no matter what the rating is. As a parent, it's ultimately up to you to judge what is good or bad for your children to play. We also make sure to be there with him the entire time he is playing these games.
I'm a real big FPS fan, and Daemion has walked in on me playing them a few times, not to mention hearing me talk about how much I love them. I used to tell him that one day he'd be able to share my joy of those types of games. Then, when Water Warfare(FPS using Squirt Guns) came out, I instantly checked out some gameplay videos and then made the decision that it would be ok for him to play it. As for Overturn(Fighting Robots), Daemion loves anything that has to do with robots, and I was wanting the game for myself too. So after playing it for a while I decided that it too would be ok for him to play. He actually doesn't really like the game because of the difficulty and controls. It can take some getting used to.
Posted by My Little Gamer at 4:07 PM No comments: 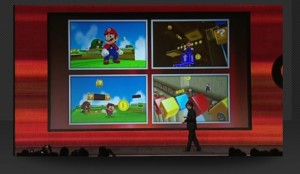 Link
-Dustin
Posted by My Little Gamer at 1:42 PM No comments: 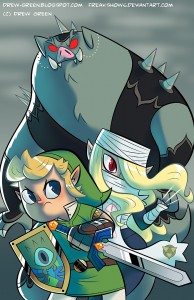 Check out more here
Thanks to GoNintendo
-Dustin
Posted by My Little Gamer at 12:52 PM No comments:

-Dustin
Posted by My Little Gamer at 12:48 PM No comments:

Email ThisBlogThis!Share to TwitterShare to FacebookShare to Pinterest
Labels: WiiWare 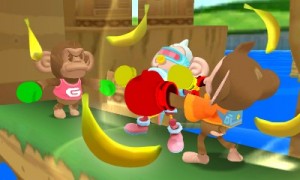 - select one of 16 characters
- 8 are playable when you start the game
- unlock more monkeys by playing through Monkey Fight in single player mode, grabbing special bananas, and through Play Coins
- 4 monkeys fight at once
- 2D stages
- bananas fall from the sky and onto ledges for players to grab
- steal bananas from other monkeys by beating them up
- punch barrels 10 times to jump inside for your special attack
- monkey with the most bananas at the end of the round wins
- there's also a "hidden mode" that conceals the banana counts on the bottom screen
- each monkey has a different fighting style
- Jet, a martial arts master, has nimble punches and can throw a fireball
- Gongon, a heavy gorilla, packs a powerful punch, is slow, and has a strong shoulder tackle
- Captain Aiai uses guns for a long range attack
- supports download play, but cuts back on roster

More screens here
Thanks to GoNintendo
-Dustin
Posted by My Little Gamer at 12:39 PM No comments:

Captain Jack Sparrow and his band of pirates will bound into 3D action with LEGO® Pirates of the Caribbean: The Video Game for the Nintendo 3DS™ hand-held system in May 2011. Published by Disney Interactive Studios and developed by TT Games, the Nintendo 3DS version will bring the LEGO Pirates world to life with vivid 3D in the palms of players’ hands. The game will include unique features such as “Pirate Duel,” a chance encounter system, as well as high resolution graphics and support for Play Coins.

“The swashbuckling and witty Pirates of the Caribbean universe is perfect for the breakthrough portable entertainment the Nintendo 3DS will deliver, ” said Adam Sussman, senior vice president of publishing, Disney Interactive Studios. “The 3D effects of the Nintendo 3DS lets players experience a LEGO game like never before, and allows us to add a new depth to Jack Sparrow’s world.”

Konami Digital Entertainment GmbH will unveil ten 3D-enabled sports for Nintendo 3DS™ this June, as it releases HUDSON SOFT’s Sports Island 3D for the new format.
Sports Island 3D marks the debut of HUDSON SOFT’s fun series for Nintendo 3DS, and allows up to four players to participate in events designed to show off the 3D capabilities of the new format. The ten sports on offer are Soccer, Tennis, Basketball, Ice Hockey, Snowball Fighting, Sumo Wrestling, Bowling, Snowmobile Racing, Sport Blowgun and Trampoline. Each demands different skills from the user, and has been designed to make stunning use of the additional depth of field the format offers. 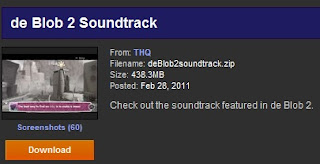 Thanks to Gamespot and GoNintendo

-Dustin
Posted by My Little Gamer at 12:20 PM No comments:

By: Erik Gruenwedel
Netflix said it expects to have 80% of its streaming content available with subtitles by the end of the year.

Netflix created a new page (http://movies.netflix.com/subtitles) on the website that allows users to determine which shows ands movies have subtitles. Those that do have access to subtitles are outlined on the program’s detail page.

Posted by My Little Gamer at 12:15 PM No comments:

Boba Fett for the win! 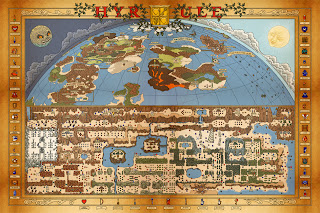 (Click image for larger version)
Link
Thanks to GoNintendo
-Dustin
Posted by My Little Gamer at 11:59 AM No comments:

Platform: Windows PC, PlayStation 3, Wii, Xbox 360
Rating: Everyone
Content descriptors: Comic Mischief
Rating summary:
This is an action-platformer in which players assume the role of a small chef who must assemble giant hamburgers. Players must avoid 'cartoony' hazards (e.g., grill flames, spikes traps) and oversized enemies (e.g., carrots, apple cores, hot peppers) in each level. The chef blinks and falls off-screen when hit; enemies react to damage with a 'dizzying' effect.
Thanks to GoNintendo
-Dustin
Posted by My Little Gamer at 11:52 AM No comments:

We’ve known about 3DS’s battery life while playing games for quite some while now, but what about the system’s battery life when the lid is closed, that is, when it is on standby?
Big gaming website CVG have reviewed the 3DS this weekend – and have mentioned in their review the following about battery life on standby:

“In sleep mode the 3DS’s juice lasted for a day comfortably.”

How long is “a day” for the 3DS battery’s 1,300 mAh of charge?
We’d say at the best estimate it’s 24 hours and at the worst we’d be talking about the battery life for a normal day’s use – that is, using a 3DS like a smartphone or tablet and not switching it off, instead closing the lid after we’ve switched it on for the day or after a quick bit of gaming and walking about with the thing using StreetPass and communicating with other 3DSes.
Read more »
Posted by My Little Gamer at 11:23 AM No comments:

Company will consider successor once developers have run out of ideas.

3DS is all the rage in Japan right now. Meanwhile, the Wii is consistently in second place in console sales over there.

Time for a Nintendo console reboot with a successor to the Wii? Japan's Yomiuri Shimbun newspaper asked this very question of Nintendo CEO Satoru Iwata.

Replied Iwata: "It's just four years since release. It's selling over 7 million units a year in North America, so we don't think it's at the limit. We'll make decisions about a successor system at the time when software developers cannot offer surprises (on the Wii)."

The possibility of a Wii successor has been one of the constant questions Iwata has had to address at Nintendo's quarterly earnings meetings and whenever being interviewed by business press like the Yomiuri. His response tends to be similar to the above.

In Japan, Nintendo recently announced a few major new Wii titles, including Tower of Pandora, Rhyhtm Heaven and Kirby. The latter two had been previously announced but are now on track for release this year. Pandora will arrive even sooner -- this Spring.

But Wii will probably need more than just three titles to survive for the coming year. We'll hopefully get some hints at the system's lineup at Iwata's Game Developers Conference keynote address later this week. You'll apparently be able to watch the keynote live, according to Nintendo of America's twitter.
Thanks to IGN!
----
I'm thinking sometime around Christmas 2012 we might see the next Nintendo console, but who knows, it might be longer than that!
-Dustin

Posted by My Little Gamer at 11:07 AM No comments: