First off, let me say that Daemion and I have been having a blast with writing up the Review and making the Blog this week. We have met some really cool people, and have got some great help from friends of ours(you know who you are!). It has also been a major challenge coming up with a way for Daemion to score these games without just coming up with one number rating. My wife and I really wanted the scores to mean a little more than just one number pulled from Daemions head. Games have many different reasons why they score what they score on review sites. And we really wanted to try and keep the same style of the big review sites, but change it up a bit for the kids and parents. So instead of going the easy route with one simple rating, we figured we should go full force with our own little twist. When you first look at the scoring(below), some of you will notice there is a "Wow Factor" section instead of the usual "Presentation" section you might find on some review sites(IGN, GameSpot etc..)

Trying to get out of a child how good the menus, difficulty, placement of items etc.., is like pulling teeth.
So we replaced it with the "Wow Factor" section. Just like it sounds, this section is about how excited a child is over what the game has to offer, before and after they have played it. For instance, ExciteBots has a multitude of reasons why it has scored high on Daemion's Wow Factor scale. As you can see in the Review score, there are Transforming Robots and High Speed Racing. Those are two things that Daemion absolutely love in a game, as do most children I would imagine. Something like Mario would score super high on this scale too, I mean, what child doesn't know of or love Mario?
Now, the Presentation section isn't gone for good. You'll see at the bottom of the Review that there is a Parental Guidance section. That is where I will be putting my two cents in about how the game itself runs. Things like ease of menus, difficulty, and parental need to knows like, ESRB Ratings, possible help with reading etc.. will be part of the section. The rest of the scoring is the usual stuff that we have all seen before and is pretty self-explanatory. So I'm not gonna get into that right now, because this is already shaping up to be a big read.

Over the last few days Daemion has had a crash course on game reviewing. We have been showing him some Review Sites with scores on some of the games he has played over the last couple years. When talking with him about what kind of game should, or could score a perfect 10, we showed him the reviews on Mario Galaxy 2. This is a game he played a loved to the max and it has pretty much scored a perfect 10 across the board from almost all game sites. It's easily one of his top 3 favorite games of all time. So when asking him about what he thought the different scores should be, I always reminded him of what a 10 can be. Also, when it came to something that would score on the lower side of the scale for comparison, I chose a game that Daemion and I absolutely hate and that is broken to bits if you ask me. That game is, Stunt Cars for the Wiiware service. I'm not going to get into that right now, because that's going to be reserved for another day.

Alrighty, enough with the intro, on with ExciteBots! Let me start with what I think about it's difficulty. At first, the game was pretty hard for Daemion to get used to. The controls are very precise and that caused him to be all over the place when trying to race, hitting jumps and playing the little bonus games while racing. This seemed to bum him out a little bit until I told him one thing. "Take it easy, try not to turn so hard".
Just those few words made a world of difference to his playing ability. After that, it was on like Donkey Kong!
The menus are pretty straightforward. The 2 button is used to select where you want to go, and the 1 button is used to go back to the previous screen. I had to help a little with the reading of the menu, but that was about it. The only thing he really had problems with was the online. Took him a minute to figure out how to leave a match and change colors of his car, but that was about it. Some kids might have more or less trouble with these issues he had, but overall the game doesn't need much parental help.
One of the only things I had a problem with was the fact that they included a "Poker" type minigame in the minigame section and online with betting. Some of you parents might not like how poker has been included into the game, so keep this in mind when deciding to possibly get this game for your child. This game has also been Rated E, by the ESRB. Click HERE to see everything they said about it.

Now on to Daemion's scoring. All the quotes you will see here by Daemion will be typed out by him. This is a real cool way to help him with his reading, writing and typing skills. This was also one of the main reasons why this blog was started to begin with.
At the beginning of each section you will see a question or two from me, followed by Daemion's answer.
Please remember, these quotes are from a seven year old boy, not a professional reviewer. Nor am I the greatest at asking questions or reviewing games. This is something we are both gonna have to get used to and gain experience from. So, here we go!


[Total Play Time]
About 8 hours in one week
Total of 6 "S" Ranks
[Wow Factor]
Prior to him playing the game, I asked what he thought about the idea of a game that had Robots that transformed into Cars that drove really fast and did all kinds of big tricks while racing.
Daemion: "Are you serious? Is this a new Transformers game? Can I be BumbleBee?"
No son.. this isn't transformers, it's a game made by Nintendo. What do you think about the idea of a game that does that?
Daemion: "That sounds awesome. So they transform into cars and go really fast? I want that!"
So, what would you score that based on how excited you were and are now about it?
Daemion: "9. It is no mario, but very close"

[Gameplay]
Is there anything about the game that you don't really like? Anything you would change about it?
Daemion: "It was hard to get good at the controls, but after that, it was great. There isn't anything I do not like about the game. I give it a 10!"
So you think it deserves a perfect 10? Are you sure?
Daemion: "Oh yea, I love this game, it plays prefect. I love all the stuff you can do while racing. It's Mario Kart good"

[Replay]
So, Daemion, do you think you might end up keeping this game? Or is it something you could see yourself trading in one day?
Daemion: "I'm not close to done yet. I have lots of colors to get for all the cars and the secret cars too. Oh, and the little trophies! I could play this for a very long time. It's a 10"
Well, what are you gonna do after you get all the extra stuff?
Daemion: "Play some people online. Maybe I'll play someone I know one day too. It's a keeper."

[Sound]
So, what do you think about the Music and Sound Effects on this game? Do you like them?
Daemion: "What are sound effects exactly?"
It's noises you hear when say, your swinging on the spin bar, or what you hear when you launch off the top of a hill.
Daemion: "Oh, haha, yeah those are ok. It gets annoying sometimes when you hear it over and over. The music is ok, not really my style. I love the music in Galaxy 1 and 2. That is good stuff.
I give this game a 7 for sound" 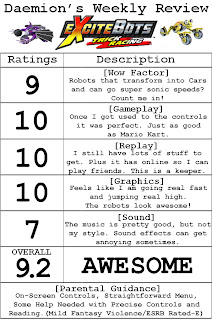 Click image for larger view
Well, there you have it folks. I really hope you enjoyed this review.
Daemion worked, or played, his butt off to learn what he could about this game in one weeks time.
Next week there might a few changes in how things work and length of the review itself.
If you have any questions, leave a comment below! Comments are very welcome.
Thanks for looking and have a great day everyone!
Next Week: Epic Mickey
-Dustin, Holly and Daemion
Posted by My Little Gamer at 1:47 PM

Email ThisBlogThis!Share to TwitterShare to FacebookShare to Pinterest
Labels: Reviews