[March Old-School Favorite]
Super Mario 64 was a launch title for the Nintendo64 back on June 23, 1996 in Japan, September 29, 1996 in North America, March 1, 1997 in Europe/Australia and September 1,
1997 in France.
The N64 was leaps and bounds better than Nintendo's previous systems. I had first read about the system in a magazine(EGM?) in the News stand isle at our local Grocery Store back when I was a kid. I was floored when I saw some pictures of what the new Mario game was going to look like. I wasn't able to get the system when it first launched for various reasons, mainly being 16 without a job. For weeks I had seen and heard all sorts of stuff about the new Nintendo system and the awesome new 3-D games that were out for it. With the system being released in September, it was looking like Christmas before I could get my hands on one. All my friends were either Sega fans or played PC games only. I was a lone Nintendo fan, and didn't even have the newest system to enjoy. I had even dropped many hints to my parents over and over about wanting one. They just kept saying, "you know what times of the year you can get things like that". I could remember getting our new Super Nintendo with Super Mario World years before, oh how I could taste it again.
Then one day, I was out with a friend driving to the store to pick up some stuff for his mom. As we was on our way to the store, my friend lost control of the vehicle and we crashed into a telephone pole at around 30MPH. I was not wearing my seatbelt(it was broke), so I ended up going about half-way through the windshield when we hit. My friend had his seatbelt on, but got bruised up real bad. We both literally felt like we had been beaten to a pulp. After we both left the hospital, my friend and I didn't speak for a couple days. Then one morning I woke to my friend opening up my bedroom door saying, "hey man, wake up, your parents came and picked me up and then left.. they told me to wake you up". I was totally confused. What the heck was going on? This just didn't sound like something my parents would do. I just kept asking myself and my friend what was going on. Then after a few minutes had passed and we had made it downstairs to the living room, my parents walked in the door. They were holding something real big in a bag. Then it hit me, I knew exactly what they had in the bag without seeing it. The day had finally come, I was going to play a Nintendo 64! It was one of my most memorable moments of receiving any gift from anyone in my life so far. After being in a wreck, and being laid up in bed in pain for days, this completely pulled me out of the hole I was in. As I pulled out the Nintendo, Mario 64 plopped out of the bag. I couldn't believe it, it was mine! I was finally going to play the game I had heard so much about in the magazines and by friends at school. As I inserted the cartridge and flipped the system on, I was taken back to the previous times I had got that new Mario game. Every one I had played prior just got better and better(yes, I love part 2). Nintendo had never disappointed me on this day, and I had total faith in this being the best Mario game I would play until the next one was released. Some people were afraid that the new 3-D images was going to change things for the worse, but after playing the game for a few minutes, I knew it was going to be the future of games. My friend and I played Mario 64 all day and far into the night. I had never played a game quite like it before, the exploring elements were like no other, the 3-D graphics were so much better than anything I had seen on a console. There was just so much stuff to figure out and do, I thought I would never finish it. That was ok though, I was totally content with keeping it that way. I eventually finished the game with a little over 100 stars about a month after getting it. This was also with no help or guides. It is still to this day in my top 3 favorite games of all time.

When I asked Daemion earlier what classic game he wanted to pick for his favorite this month he said, "ummm, Mario 64!". Then I asked why he wanted to pick that game, he said "it was one of the first games I ever played, its fun, and it's mario". Which is true, it was actually the first game he ever played. When we first got a Wii a few years ago, Mario 64 was one of the first games we downloaded when we got a few points cards. Right after I downloaded it, I handed the controller to Daemion and let him loose. It didn't take him no time and he was jumping, sliding and flying around having a blast. He has 26 stars right now that he got on his own over the last few years of playing it on and off. He actually has got those stars a few times over. Our Wii has had some problems in the past and we lost our save data, so he had to get them all over again. The last time he played it a few weeks back he surprised me at how good he had actually got at the game. I'm really hoping he chooses to review this game later on down the road, because it's one of the greatest classics of all time. Plus, if you can't tell already, i'd love to help him review it. I bet we could get all the stars in less than a week! haha
Well, sorry for the long read folks, but I really wanted to share this story with all of you and my son Daemion. He will be reading this blog post first thing in the morning when he gets up.
Hope you enjoyed the read, have a good night!
Super Mario 64 is available on the WiiShop
Channel for 1000points($10)
[Make sure you check out the
Fan-Made Trailer below] 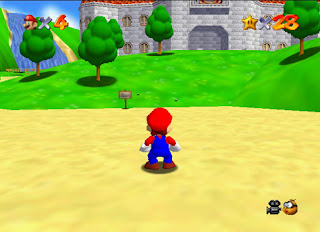