3DS Impressions by My little Gamer 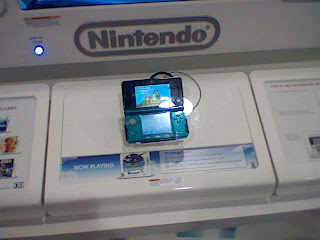 Our Best Buy finally got a 3DS Demo Station yesterday, so we headed up there just a few hours ago to test it out. When we first walked up I quickly moved the 3D slider all the way down, then I pulled it from it's dock and gave it to Daemion to try it out. As soon as he turned the 3D on he got a HUGE smile across his face. I told him to play with the slider to find the sweet spot where it looks best. So he quickly moved it up and down and found out that about half way works best for him.

As you can see in the pics, Pilotwings was the game being demoed. Daemion kept saying the whole time, "Aw man, this is awesome.. this is just awesome". He played for around 15 minutes to see if he felt dizzy or got any eyestrain, but he never did at all. After he played for a bit, he looked at me and said I had to try it. So I grabbed it and messed with the slider to find what worked best for me. I only had to move it slightly above the off position and I got the full 3D effect without any blurring. I was very skeptical about how good the 3D worked, but after trying it, I was blown away at how good it actually looked. The graphics were also very smooth and the depth is just insane. I was also concerned about the placement of the D-Pad, but after fiddling with it a bit I found out that it's pretty comfortable and doesn't feel like it would give my thumb any strain at all. The slide pad also felt nice and was very responsive while playing Pilotwings.

Overall I think the 3DS is an amazing piece of machinery. Just the Demo alone gave me enough reason to warrant a purchase. Daemion and I can't wait to finally get our hands on one some day soon. Hopefully it will be sooner than later. So, when we were leaving the store I asked Daemion what he would score(1-10scale) the 3D and graphics based just on the Demo he played. He instantly said an 11! Personally, I can see where he got that number, I think it's fantastic too. I can't wait to try out all of the other countless features. I really do think that if Nintendo can keep getting the blockbuster titles for this thing, it will easily outsell the mighty DS. This thing is truly not a gimmick, it's the real deal. 3D with no glasses baby! Wooooo!!

Daemion: This is AWESOME!
You guys need to get one!
It looks amazing!
(Pics taken with our DSi) 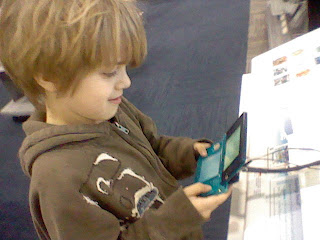 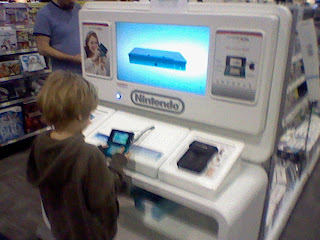 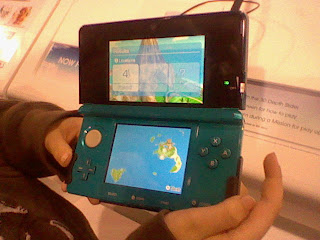 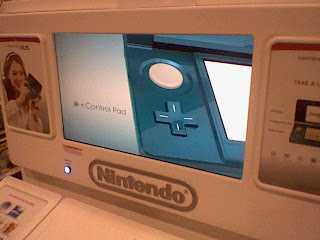 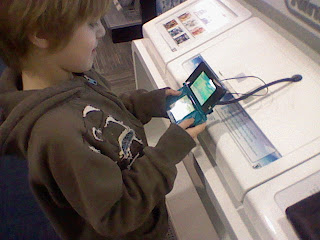 Hope you guys enjoyed our impressions of the 3DS.
Sorry if there is any mistakes in this blog post.
It's very late and I've had a very looong day.
-Dustin
Posted by My Little Gamer at 11:08 PM 8 comments: