Ever since we started the blog, I've had a few people email asking if we played or owned any other game systems. The answer to that is yes, we do. We currently have a PS3 and Original Xbox, but don't own very many games for either one because there is so many Nintendo games that we must have first. As a matter of fact, when Daemion got home from school today he wanted to fire up the Xbox. While he was playing I ran in there with the camera and said, "smile for the blog fans!" lol.
Daemion loves all types of games on different game systems, but he has always wants to play the Nintendo more than the others.
I wouldn't play anything Sega when I was a kid, much less own one. Even if my parents offered to get me one, I still wouldn't have played it. But over time I changed my opinion on stuff like that. I finally realized that if you get stuck on one particular system, you're gonna miss out on some other great kinds of gaming elsewhere. I've owned all different kinds of game systems over the years, and I still to this day choose Nintendo over the rest. I'm also very proud to say that everyone else in my family feels the same way. My parents even still play games to this day.
You should hear some of the stories about my Dad when he had Pacman fever back in the 80's. Classic stuff! lol 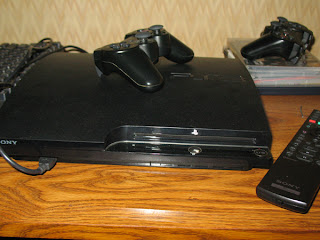