The tale of the two 3DSes 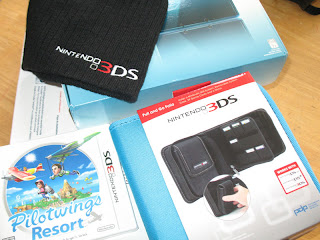 First off, I want to thank Gamesplash.net for hooking us up with a brand spankin' new 3DS, Pilotwings, Case, and a very cool beanie! Without them, this wouldn't be near as cool of a story. For those who don't know, I filmed Daemion smashing our DS to show Gamsplash how bad we wanted to win a 3DS. You can see the original story we posted about it HERE.

It all started with the Nintendo TV. Some of you may remember us making a post about the Rare Nintendo TV that I found while cleaning out a rental house(original story HERE). It was one of the greatest gaming finds I have ever ran across. But after doing some research on it, I found that restoring it would be next to impossible. So I decided to let it go to the first person who had something interesting to trade. So I called a few gamestores around town to ask if anyone wanted it. After a few calls, I found someone who was willing to do some trading. In the end, we got a DSlite, Red Steel 2 w/ Motion plus, and a DS game.
I'm my eyes this was a good trade, though some might say I was crazy for letting something like that go.
Now, back to the giveaway. When we first posted the video at Gamesplash, we were for sure that we were gonna win, because nobody had come close to what we had done. Well, one guy had smashed an I-phone, but he really didn't show that he did it, just a picture of the aftermath. When it came close to the end of the contest, we were counting down the hours. Then.... on the last day of the contest, someone posted a video of himself getting tazed, spayed with mace, and then snapping their DSlite in half. We just couldn't believe it! Someone had out done us by far if you ask me. The only thing that I seen in the video that I thought was kinda bad was the excessive cussing and talking about guns. Either way, Daemion and I had already accepted defeat. There was just no way we could top that.
A few days go by, and still no update to the site, or an email. We both just knew we had lost. So, after much discussion, we decided we were gonna get a 3DS anyways. So we packed up almost all our Wii/GC/DS games, DSI, the DSlite we just got, some controllers, and then headed to GameStop. It wasn't something either one of us really wanted to do, but it was the only way to get one. We just weren't wanting to wait till Christmas to enjoy the 3DS. The demo we played really left an impression on us that we couldn't shake. After everything was said and done, we ended up getting a black 3DS and Kirby's Epic Yarn(on sale for $26). We really wished that we would have had enough to get a 3DS game, but we just didn't have enough credit and cash. That's ok though, Kirby is a fantastic game that everyone in the family now loves to play.
Then, THE VERY NEXT DAY, I checked my email and there it was, a message from the administrator at Gamesplash telling us that we had won. I just couldn't believe it. It sat there for the longest time in total amazement. Then, after gathering my composure, I quickly ran into the living room and grabbed Daemion up and screamed, "We did it buddy, we won the 3DS!". We then both proceeded to run around the house like madmen screaming we had won. But then it hit us. We both looked at each other and said, but our games, they are all gone! Why didn't we wait?! We could still have our games and a 3DS, NOOOO!
It's kinda funny when we look back at what happened now. I really think that this will be one of those stories that we will talk about for a very long time. Would we change it if we could somehow go back? Nah. The 3DS is too cool. Not to mention, Daemion now has his very own 3DS that is his to play and take care of. Plus, this isn't the first time we lost almost all of our entire collection. Our Nintendo went out on us last year and had to be sent in for repairs. When that happened, I traded most of our collection for another system with some games to keep us busy for the 3 weeks the Nintendo was gone. Not to worry though, just like before, we will get the games again. You'd be surprised at what kinda deals you can find on games if you look hard enough. Not to mention, we have well over 100 games downloaded to our system that we have been meaning to play. So this is a chance for us to open up that back catalog we have been needing to finish.
Hope you guys enjoyed our little story about how we came to have two 3DSes. I think the lesson to be learned here is that Patience is totally a virtue... but living on the wild side can have it's benefits too. lol

We were gonna wait to post this later today after I put up some news, but I found out that Daemion's teacher is supposed to show the blog to his class today, so I wanted to hurry up and get this story out. I'm thinking some of his fellow students don't quite believe him when he says that we have 2 3DSes. So here's your proof guys, pictures and all. I will try put up yesterday and todays News later tonight after gametime(so this story doesn't get buried in the news). Just might have some time to squeeze in a gameplay video of Pilotwings too. See you guys later!
Any of you guys have any crazy stories like this to share? Post em!
We would love to hear them!
-Dustin and Holly
Posted by My Little Gamer at 2:06 PM