This is one of my all time favorites from the arcade next to Pac-man and Donkey Kong. Daemion and I usually play it about once a month to try and beat our personal high-scores. When we started playing it yesterday I asked Daemion if he wanted to do a short review of it. Naturally he said, "Of course!". So we ended up playing for around an hour. After we finished playing I asked him what he would score it overall as a game. At first he said, "An 8!", but very quickly changed his mind and said, "Well, it's not that good. It's a 7".

Since this is a Micro Review of sorts, we are going to keep this quick. Below is an image of the score and some quotes about the game from Daemion. As for Parental Guidance, there really isn't much needed. All I had to do was show Daemion how to get the double shot. For those who don't know this, it is done by letting one of the big blue or green enemy ships pull you up into their tractor beam, then you shoot the enemy down and get your ship back. This enables you to have two ships side by side giving you two shots at once. 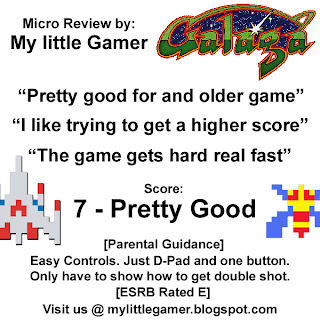 Purchased at the WiiShop Channel for 500 points ($5)


I'll try and have a Gameplay video uploaded soon!


-Dustin, Holly and Daemion
Posted by My Little Gamer at 1:18 PM