It's finally that time

Daemion's little brother is finally getting to be that age where he can start playing some great games. His name is Louscion(Lew-shin), and he turned 4 this past September. He has played the PooYoo's Wiiware games during the last few months and has had a blast with them. We let him try to play some Mario Kart a while back, but he didn't have much fun because he just wasn't good enough yet. This also seemed to turn him off from playing most games too. But now, he is finally starting show interest in it again. So today we gave him a wheel again and tried our best to help him with the controls. His skills have improved a good bit since his last attempt at playing. He isn't the best at racing yet, but he has found out that he absolutely loves battle mode! His favorite character is Luigi too! I'm really hoping he keeps it up, cause Daemion really wants his little brother to keep playing games right along with him. Who knows, I might have to change the name of the blog to "My little gamers".
Here's a picture I snapped of them playing Mario Kart earlier without them knowing. hehe 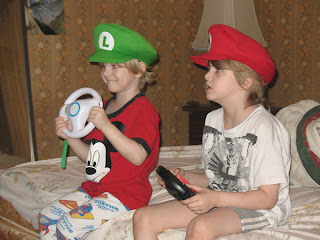 -Dustin
Posted by My Little Gamer at 1:59 PM